Top 10 Must Visit Tourist Attractions in Mysore (City of Palaces)

Mysore, officially Mysuru, is a city in the southern part of the state of Karnataka, India. Mysore is found within the foothills of the Chamundi Hills. Mysore is known for its heritage structures and palaces. Tourism is the major industry in Mysore. Famously referred to as The City of Palaces, it wouldn’t be wrong to say that Mysore is one of the most flamboyant places in the country. Mysore is that the third most inhabited town within the state or province, and its rich cultural heritage draws millions of tourists all year round. 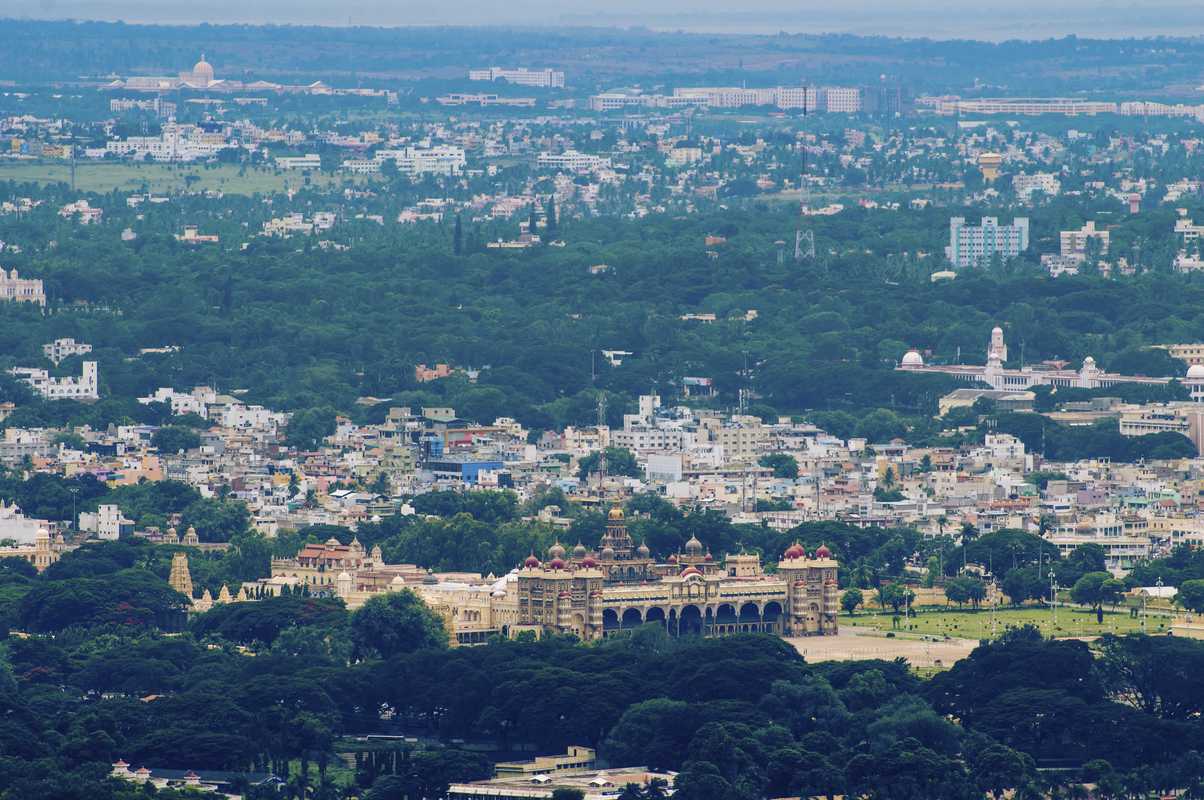 Mysore for certain features a tropical climate, but the Monsoons and Winter are the best time to visit the city. The monsoon – winter months from July – February has pleasant weather as a halt from the extreme heat of summer. With these months captivating the city’s beauty; summers are less ideal for traveling and sightseeing.

HOW TO REACH MYSORE

By Air: The closest major airport to Mysore is the new Bangalore International Airport, which is about 170 kilometers away. Bangalore itself is incredibly socially connected to a lot of cities in India. It takes about three hours by road to reach Mysore from Bangalore.

By Train: Mysore is incredibly well connected by rail throughout the region and the railway station is just about 2 kilometers from the city center. You will find several express trains between Bangalore and Mysore that cover the distance between the two cities in about three hours. Bangalore itself is very well-connected to most other cities in India.

By Bus: One can also take the bus from Kempegowda Bus Station in Majestic to Mysore. There are various options for state transport buses as well as private tour operators. Tickets are easily available at the bus station ticket counters.

Now Coming to top attractions, here are the must-see places in Mysore…

Mysore Palace is a historical palace and a royal residence at Mysore in the Indian State of Karnataka. The palace is situated within the center of Mysore and faces the Chamundi Hills eastward. Mysore is commonly known as the ‘City of Palaces’, and there are seven palaces including this one; however, ‘Mysore Palace’ refers specifically to this one within the Old Fort. The palace is a three-story stone building created with fine granite, grey in color, having deep pink marble stones atop and a five-story tower measuring 145 ft.

Distance from the station: 1.9 Km

On the banks of Holy river Kaveri is a little tranquil town of Somanathapura. The fascinating fact about most of the names of Indian monuments and cities – they have a meaning. In this case, the temple was built by general Somanatha (who worked during Hoysala King Narasimha III reign). Pur(a) in Sanskrit means a city or settlement. Somnathpur Temple is the main attraction as well as a fascinating site for architecture and culture lovers exploring Karnataka. Somnathpur is a Vaishnavite temple which means that it is a temple dedicated to Lord Vishnu.

Distance from the station: 34.7 Km 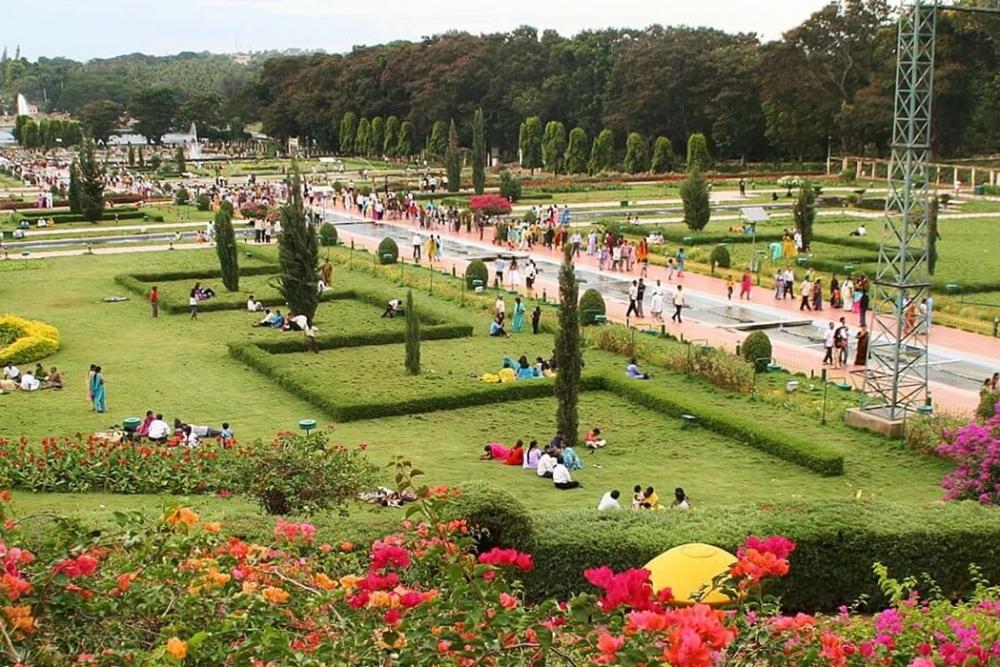 The Brindavan Gardens is a garden which is situated in the Mandya District of the Indian State of Karnataka. It lies adjacent to the Krishnarajasagara Dam which is constructed across the river Cauvery. Visited by approx 2 million tourists per annum, the garden is one among the major attractions of Srirangapatna. Sir Mirza Ismail, the Deewan of Mysore, a man with a penchant for gardens, founded the Brindavan Garden. The larger space around the Brindavan Gardens is a haven for plant lovers and skilled horticulturists. One can find the latest growing techniques being demonstrated and different breeds of a wide variety of fruits, flowers and other plants in these large plantations.

Distance from the station: 19.9 Km 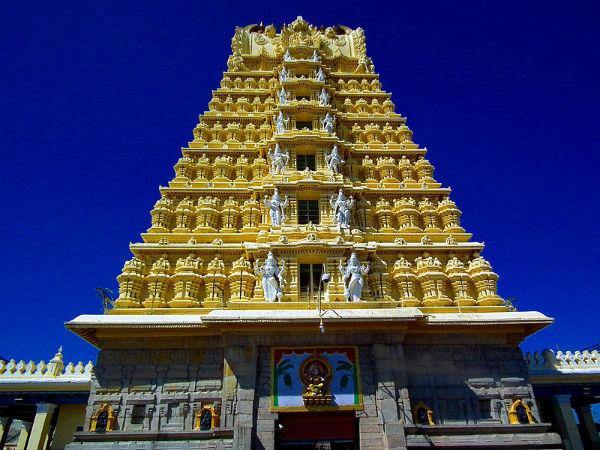 The elegant palace is painted pure white. It was changed into a heritage hotel in 1974. Chamundeshwari is termed by the people of Karnataka as Naada Devathe which means State Goddess. The temple is known for the celebrations of festivals like Aashada Shukravara, Navaratri and Ammanavara Vardhanthi. This temple has about 1000 steps from the foot of the hill. The deity is seated on a lion, killing the demon with her ‘Trishul’. With its spectacular architecture, great historical significance and surrounded by nature’s serenity at the Chamundi hills, this temple is still known as a prominent temple in India.

Distance from the station: 13.2 Km 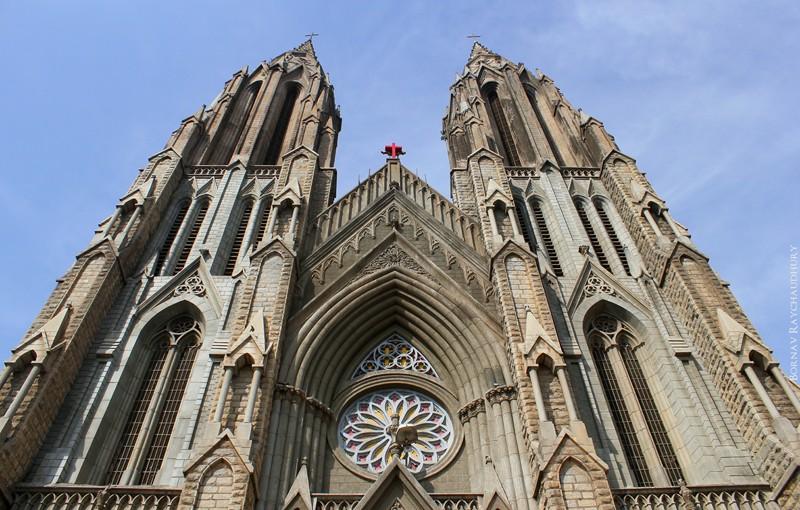 St. Philomena’s Cathedral is a Christian church that’s the cathedral of the Diocese of Mysore. It was made in 1936 using a Neo-Gothic style and its architecture was influenced by the Cologne Cathedral in Germany. This is one among the tallest churches in Asia. The church is beautiful and one of the most distinctive landmarks of the city. It looks even more beautiful in the evening sky. It is one of the most important historical sites in Mysore and is frequently visited by tourists from all over the country.

Distance from the station: 2.5 Km

Jaganmohan Palace is a palace in the princely city of Mysore, India. Its construction was completed in 1861 and was first used by the Wodeyars, kings of Mysore. The palace is one of the seven palaces of the royal city and one of the most beautiful contributions of the Wodeyar Kings to the city during their rule. Jaganmohan Palace has been constructed in the traditional Hindu architectural style. It is a three-storied building. The most striking feature of this palace is the intricate carvings that adorn the entire structure. An amazing masterpiece, the main door of the palace has exquisite carvings on both sides.

Distance from the station: 2 Km

Karanji Lake is a lake situated in the city of Mysore. The lake is enclosed by a nature park which consists of a butterfly park and a walk-through aviary. This aviary is the biggest ‘walk-through aviary’ in India. The butterfly park has been created on a little island within the Karanji lake. Nearly 45 species of butterflies have been identified here. The lake is sometimes also known as the fountain lake. A lot of people come here to celebrate picnics with their family. There is a waterfall too with two water bodies alongside.

Distance from the station: 4 Km

The Folklore Museum in Mysore is housed in the Jayalakshmi Vilas Mansion of the University of Mysore. This museum has a collection of nearly 6,500 indigenously-made artifacts sourced from all over Karnataka. A section of the museum is dedicated to folk performing arts such as Yakshagana and Kathakali; it houses ornaments, masks, and crowns used in these performances. It has an expensive collection of artifacts, handicrafts and indigenously made art forms from different parts of the state of Karnataka. The Hanuman crown of Kugala Balli village in North Karnataka is a distinguished attraction of Folklore Museum.

Distance from the station: 3.4 Km 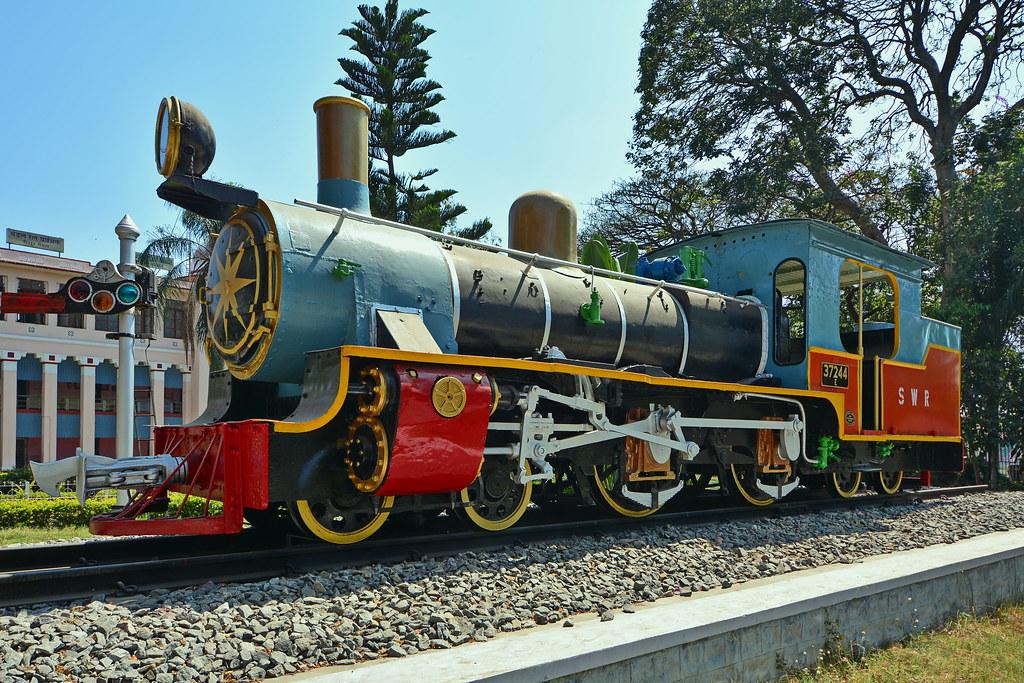 Distance from the station: 3 Km 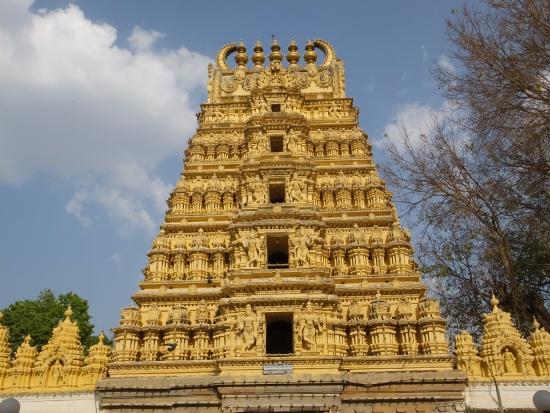 This ancient temple was constructed by the Wodeyar Kings in Dravidian style. The temple was expanded and renovated by several Maharajas of Mysore. Kanthirava Narasaraja Wodeyar established a verandah and consecrated 5 Lingas and several deities including Dakshinamurthy, Kshetrapala, Kumara and Surya. The statues of the 2 Wodeyar kings are other attractions of the temple. An idol of the sage of Trinabindu is present to the left of the mandapa entrance. According to folklore, Sage Trinabindu performed penance at this spot and Shiva appeared. The sage then deployed the Linga here, hence the deity is known as Trinesvara.

Distance from the station: 3 Km

Explore these amazing places to see in Mysore and share your amazing experience with us! 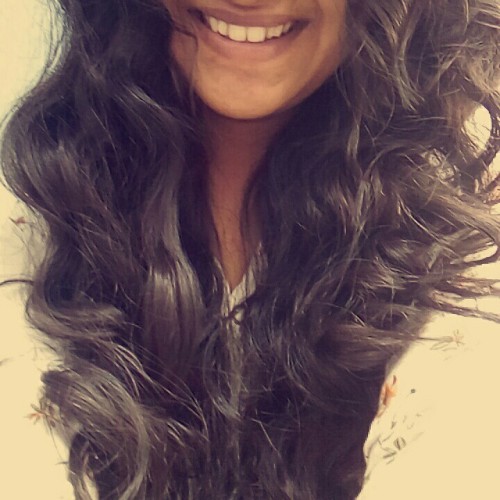