The Himachal Pradesh Tourism, at the foot of the Himalayas, consists of a range of peaks surrounded by mountains and snow. It is meritably favoured by adventure enthusiasts. In the western Himalayas, Himachal Pradesh lies. The beauty of the state is beyond imagination and surrounded by magnificent mountains, of which humanity is always challenged to conquer. The state capital is Shimla, one of the most fascinating hillsides. In this Travel Blog, we are going to share top 10 must visit places and things to do in Himachal Pradesh. 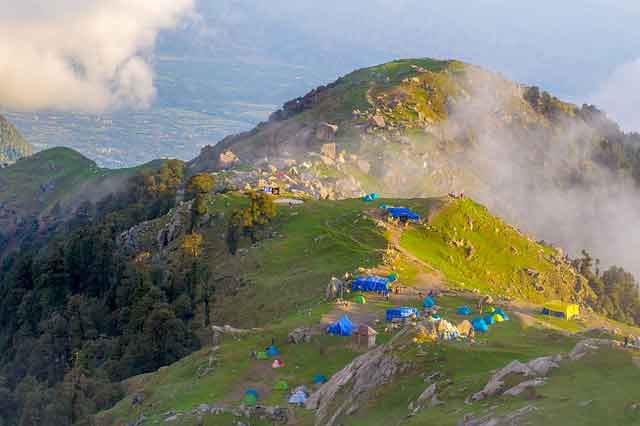 The best time to visit Himachal is February through June. During the winters, the state also undergoes a beautiful transition, i.e., between October and February when the snowfall season is. For skiing and ice hockey, this is also the best time. Summers are, however, an excellent time for hiking, paragliding, camping and water sports.

How To Reach Himachal Pradesh?

By Air: The fastest way to travel is by air to Himachal Pradesh. If you’re going to Manali, you can take a flight to Shimla or Kullu, and Kangra or Pathankot if you’re heading to Dharamsala. Flights are mostly restricted to Delhi, so to explore more flight options, you will first need to arrive in Delhi. The airport in Shimla is about 40 km from the main city of Shimla. Right outside you can get taxis.

By Road: Traveling by road is a cheaper and more scenic alternative to taking a flight. Himachal has lovely roads that are connected to major towns in India. You can enter the most remote regions of the state while you are traveling by car. You can travel on your own to Himachal or hire a taxi from Delhi.

By Rail: Himachal Pradesh has rugged terrain and the Indian Railway has not made much progress there because of that. However, for those looking to enjoy a unique experience, there are a few choices. You will be taken by train through the rural Himalayan mountains, offering you a first-hand glimpse of India’s hilly hinterlands. Untouched and pristine, this is a worth-taking train ride.

Now Coming to top attractions, here are the must see places in Himachal Pradesh…

This is Himachal Pradesh’s state capital. The Shimla Tourism stretches along the ridge of the mountains surrounded by forests of oak, pine and rhododendron. It is renowned for its historic and colonial buildings. One of the most famous sites of Shimla is the ancient Christ church, with its exquisite stained glass windows. One is the Observatory Hill Viceregal Lodge. In the vicinity there are many adventure sports and short walks.

Kullu and Manali are among the best places to visit in Himachal Pradesh. In the snow-covered areas, when you’re searching for fresh air and green mountains, Kullu Manali really ought to be in top position. Nature has kindly blessed them, and yet one is distinct from the sort of encounters they deliver. Then, holidays in Kullu Manali are about sightseeing, but it’s also about adventure, spirituality & constantly being prepared to be shocked.

Kasauli Tourism, represents the influence of colonial rule like some other places in Himachal Pradesh. Views are amazing from here and this is a well-known spa. In the center of the picturesque views this place offers you a laid-off holiday. This colonial era hill station in Himachal is the paradise of a hiker and the nest of nature lovers who are adorned with the unrivalled beauty of its majestic views of the Himalayas. Enveloped with utmost calm, this makes Himachal Pradesh one of the best holiday destinations.

Dalhousie Tourism, suitable to relax in the cool environment of Himachal Pradesh. Away from the busy urban life in Dalhousie, one of Himachal Pradesh’s top destinations is the nature. Sit down and enjoy the nature. With its waterfalls, rivers making their way through mountains, thick forest paths that run parallel to huge cliffs with great views of the Dauladhar range in the distance and a few churches that were built during the British Raj, the hill station has the amazing effect on visitors.

Chamba is a town in the Himachal Pradesh district of Chamba. Known for its antique temples, caves and houses, Chamba is renowned for its spectacular panoramic view on this picto postcard city of Pir Panjal, Zanskar and Dhauladhar. On the banks of the Ravi river, along the Jammu and Kashmir, Lahaul and Kangra rivers, is this Himalayan town situated at 996 metres. The traditional crafts and the art of Chamba is famous.

Palampur is an hour from Dharamsala in the Kangra Valley, Himachal Pradesh Tea Grows Area. The Superintendent of Botanical Gardens in Peshawar, Dr. Jameson, introduced tea to it in the middle of the 19th century. With breathtaking landscapes, the city has spectacular greenery that produces a mesmerizing experience. You can see huge tea gardens all over the palampur, and it’s unforgettable to drive along the scenic beauty of the Dhauladhar range and the slopes of the Kangra valley.

Bir Billing is the meca for physical sports if you’re an adventure seeker and must be on your list of the best tourist destinations in Himachal Pradesh. It is a small town on the west side of Himachal Pradesh, blessed by a refreshing climate. The town is also a noted hub for ecotourism, spiritual studies and meditation, generally referred to as the ‘Paragliding Capital of India‘. With several Buddhist monasteries and a large stupa, Bir is also home to a Tibetan refugee settlement. Although Billing is the paragliding takeoff site and Bir village is for landing, “Bir Billing” is collectively recognized.

Dharamshala has on three sides snow-covered mountains and on one side a valley. Trees and pine trees and mountains covered with snow make air magic. With the same beauty as other parts of the state, Dharamshala is blessed, but its strong Tibetan character is what sets it apart. You see prayer fluttering at regular intervals with prayer flags, monasteries, monks dressed in bright saffron robes. There are plenty of tourist spots, but mostly, Dharamshala is about relaxing and enjoying the serenity that is abundantly found here.

The Parvati Valley is situated in Himachal Pradesh, and runs alongside the state’s tourist resorts. The picturesque valley is renowned for rucksacks and adventures. It is also famous for its famous Hashish Charas, raves, and spiritual experience among hippy voyageurs. This ethereally beautiful valley extends to a series of villages around Barshani through touristy, forest-ringed Kasol and the busy if grubby little pilgrim hot-spring town of Manikaran.

Explore these amazing places to see in Himachal Pradesh and share your amazing experience with us!